What grabs our attention the most at ParrotAlert.com is when we see reports closed where people have given up after a short time. Two of the main reasons, is they believe their bird didn't survive the weather conditions or was likely killed by prey.

We've had many small birds like cockatiels reunited via ParrotAlert up to 50kms (31 miles) away after 12 weeks.

In August 2016, one finder had an Alexandrine found in the month prior and went through all lost Alexandrine reports within an extended area contacting each reporter until the 11th reporter was able to confirm the colour of the leg ring, the leg it was on and the ring (band) number. The Alexandrine was reported lost on ParrotAlert Oct 2015, found and reunited via a ParrotAlert report ten months later.

The following story is one of the key reasons you should never give up the slightest thread of hope and never close a report:

“On April 19th, 2016 our Eclectus escaped, we had a screw on the cage door latch came loose and she got out. We had posted on Facebook lost pet pages and ParrotAlert and the more time went on, I honestly gave up the hope of ever getting her back.” 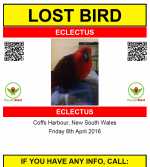 “On Saturday 24th Dec 2017 we received a call from a lady that said she found me on ParrotAlert and that she might have our girl about just over an hour away approximately 65kms (40 miles) from where we live (which didn’t surprise me as our parrot got out once before and she flew 30kms away within a couple of days). I told the lady all about our girl and the unique things she does and says and she said by the sounds of it I’m sure it’s her and confirmed she had been there for around or close to a year and a half staying and flying back and forth from her and her neighbour's properties.”

“We went over and spent a couple of hours there to see if it was our parrot, and sure enough, as soon as she saw my partner, she flew straight to him (he was always her favourite) with her unique noises and things she was saying (that only our girl would know).”

“We were sure it was her, and as soon as we got her home, she confirmed it 100%, as she became more talkative and said things our parrot would know, including our son's name in the funny way only she knew how to say it. We still had her big cage which she recognised straight away.”

“It was a Christmas miracle to get her back after being lost for 20 months. I don't think it would have been possible without ParrotAlert.”

The moral of the story here is, even though people may have given up hope and stopped searching, as long as they've planted the seeds and leave the reports they've submitted open, then finders may contact them (you), as in the reunite stories above.

Although the article above talks about lost pet Birds and Parrots, we also have an all Pet lost and found website called CritterAlert.com that mirrors what's we've done with ParrotAlert.com. Please help support CritterAlert.com by sharing with others who may need it and hopefully bring the same luck to those with non-avian pets.


Copyright © 2023 ParrotAlert.com . All rights reserved.
This article or any portion thereof may not be reproduced or used in any manner whatsoever without the express written permission of ParrotAlert.com